The Leagues weekend begins with a couple of matches of the Friday evening, where in the Premier Division it sees 11th placed Keyworth United host 13th placed Awsworth Villa at Platt Lane, meanwhile in Division One bottom of the table Kimberley MW Reserves will be hoping to gain their first points of the season when they have home advantage against near neighbours Hucknall Town Reserves who are flying high in 4th position.

On to the Saturday matches and in the Premier Division, Wollaton FC leaped to the top with a impressive 5-1 win away at Bilborough Town in midweek and face a tough away travel to Cotgrave FC who sit in fifth position, games dont get any easier for sixth placed Bilborough Town as they travel to second placed Bingham Town who have won five out of five matches. Third placed Stapleford Town host ninth placed Woodthorpe Park Rangers who won 2-1 away in midweek at Southwell City.  Fourth meets Eighth at the Ron Steel Sports Ground where AFC Dunkirk entertain Sandiacre Town. Southwell City will be looking to bounce back after their midweek loss when welcome Ilkeston Town U23's to their Memorial Ground. Aslockton & Orston seem to be a bogey side for Magdala Amateurs having beaten them by the odd goal in the past three meetings, so a close encounter is sure to be in store at the Village ground in Orston. A match where both side need points will be at the Forest Zone where FC Cavaliers face Attenborough FC

In to Division One and table toppers Ravenshead FC are on their travels to Wharf Lane the home of Radcliffe Olympic who picked up their first win of the season last weekend, any slip ups and FC Sez with a 100% start to the season will be looking to double the double over Meden Vale Colts at home who they beat 4-0 last weekend. Third placed United Grays travel to Elms Park in search of the points where they face Ruddington Village. At Eagle Valley, Gedling Southbank host Southwell City Reserves in a bid to keep up with the top three, meanwhile AFC Top Valley who play on one of the outside pitches at Eagle Valley have a 100% record out their three matches so far and will be looking to make it 4 out of 4 when hosting 13th placed Kirton Brickworks. Radford Reserves welcome West Bridgford AFC to their home where both teams will be looking to improve their points total. A local derby at Leyton Crescent sees Beeston FC face Stapleford Town Reserves, whilst one point separates Wollaton Reserves and Bridgford United FC who meet at Wollaton Village Sports Association Ground.

In Division Two North, the game of the day will take place at Bentinck Welfare, where second placed Quarrydale United host 100% leaders Beeston Old Boys Association, FC Geordie who are in third place travel out to AFC Creswell having won 4 of their 5 matches so far. Ravenshead Reds are only a point behind fourth placed Trent Vineyard, so this match could go either way.  At Nabbs Lane in Hucknall, United Greys Community play hosts to FC Mansfield, whilst Pythian Reserves host 2nd from a young Arnold Town Reserves at Melbourne Park in the Aspley area of Nottingham.  Blidworth Reds will be hoping home advantage at their Unwin Road ground will spur them on to three points but their opponents in Beeston Development may well have different ideas and hope to kick their season in to action after only gaining one point in their first four games.  Bilborough Town Development who have won two out of their four matches travel to bottom of the table Ballers FC who have started the season losing all five of their matches.

In Division Two South sees three teams all on the same number of points at the top of the table split by goal difference, on top are Bingham Town Reserves who travel to 10th placed Rushcliffe FC, whilst 2nd placed Elston United FC who are on the same goal difference host 11th placed Ruddington Village Reserves, the other side on thirteen points are Pythian FC who had to the east to face 12th placed AFC Colsterworth Sports and Social FC. Eighth play Fourth at The Poplars, where Burton Joyce Reserves entertain East Leake Robins, meanwhile the only team with a 100% record in the Division are Keyworth United Reserves who travel to AC United. The A52 derby sees Barrowby FC host Aslockton & Orston Reserves, whilst out in Newark at the Lincoln Sports Facility Fernwood Foxes play West Bridgford AFC Reserves. 14th host 13th when Long Bennington play hosts to Cotgrave Reserves.

In the  Foundation Division, with leaders AFC Bull Farm not having a match, this gives a chance for Netherfield Seniors who are on the same number of points to move clear if they beat South Notts AFC at the Richard Herrod Centre, meanwhile 4th placed Carlton Town Reserves host Rushcliffe Ravens, both may well give debuts to new signings made this week. Another local Derby sees Stapleford Town Development who are in fifth position host Phoenix Ingram at their Hickings Lane ground. Manor FC host Sutton Travellers FC in the north of the county, whilst bottom of the division side Nottinghamshire FC will be hoping to pick up their first points of the season in their seventh match when they are at home to Wollaton III who infact picked up their first victory of the season last weekend. 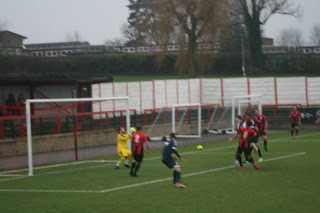